Tim Ulsaker was the Mathews HS auto shop teacher for 20 years. At the same time, he started (built form nothing) the Mathews HS rowing team and shortly after he started Mobjack Rowing Association (a club team made of up Mathews, Gloucester, and the surrounding counties). The goal of the AGC program is 90% HS graduation rate by 2020. I can't say what the graduation rate is in Mathews county (I don't know it), but I can tell you that on average only 34% of kids who do graduate attend a 4-year university after graduating. Mathews/ Mobjack has a 99% HS graduation rate and a 90% 4-year college rate. The scholarship figure is a multi-million dollar one that I have not finished calculating. Many HS teams split up the women and men and have a coach for each team. Mr. Ulsaker is the coach for both.

About 30 years ago, he started a campaign to build an eco-friendly boathouse on the East River. We have always practiced out of an old oil dock with holes in the floor, no heating or air, and no running water. The construction on the boathouse has finally begun and is scheduled to be completed by next summer. To put in a numbers for you, over the years Mr. Ulsaker was able to raise 1.2 million dollars for this project. The only season in which he receives compensation for his effort is in the spring, when rowing is in championship season and sponsored by the HS. He continues coaching in the Summer, Fall, and Winter without receiving a single penny that goes into his bank account. This man is ahead of the curve and is an unstoppable machine- I have never witnessed him event hint at giving up and at 63 years old, he doesn't seem to be slowing down. His inspirational guidance and mentoring has guided others to follow in his place. Many of his former rowers are now coaches, teachers, and guidance counselors. Some of them are in big business and some are in the military. Wherever they go and whatever they do, there is no doubt in my mind that Mr. Ulsaker's values are with them and inspiring others to build a better place for the next generation. 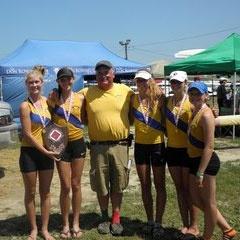 I'll tell you two stories. My father was once on the FBI's most wanted list. Not exactly a good start for anyone. I found rowing in HS and with Mr. Ulsaker as my coach I was accepted into the United States Naval Academy and I graduated in 2011. I also rowed while I was there and wouldn't have graduated without it.

The other story is more recent and probably more important. One of the boys on the team was expelled from school in the spring. He is an energetic and excitable young boy who got carried away. Following his expulsion, most people gave up on him including many his teammates. Mr. Ulsaker, having dealt with similar situations before, just shook his head and said quietly that this was not the end. Mr. Ulsaker took this boy under his wing and taught him responsibility and self-discipline. Now this young man is back in school and on track to graduate. He will also, more than likely, receive a scholarship for rowing. Most importantly he will have learned that it is not our mistakes that define us, but how we bounce back after.