Filling in this perception gap can help low-income students succeed 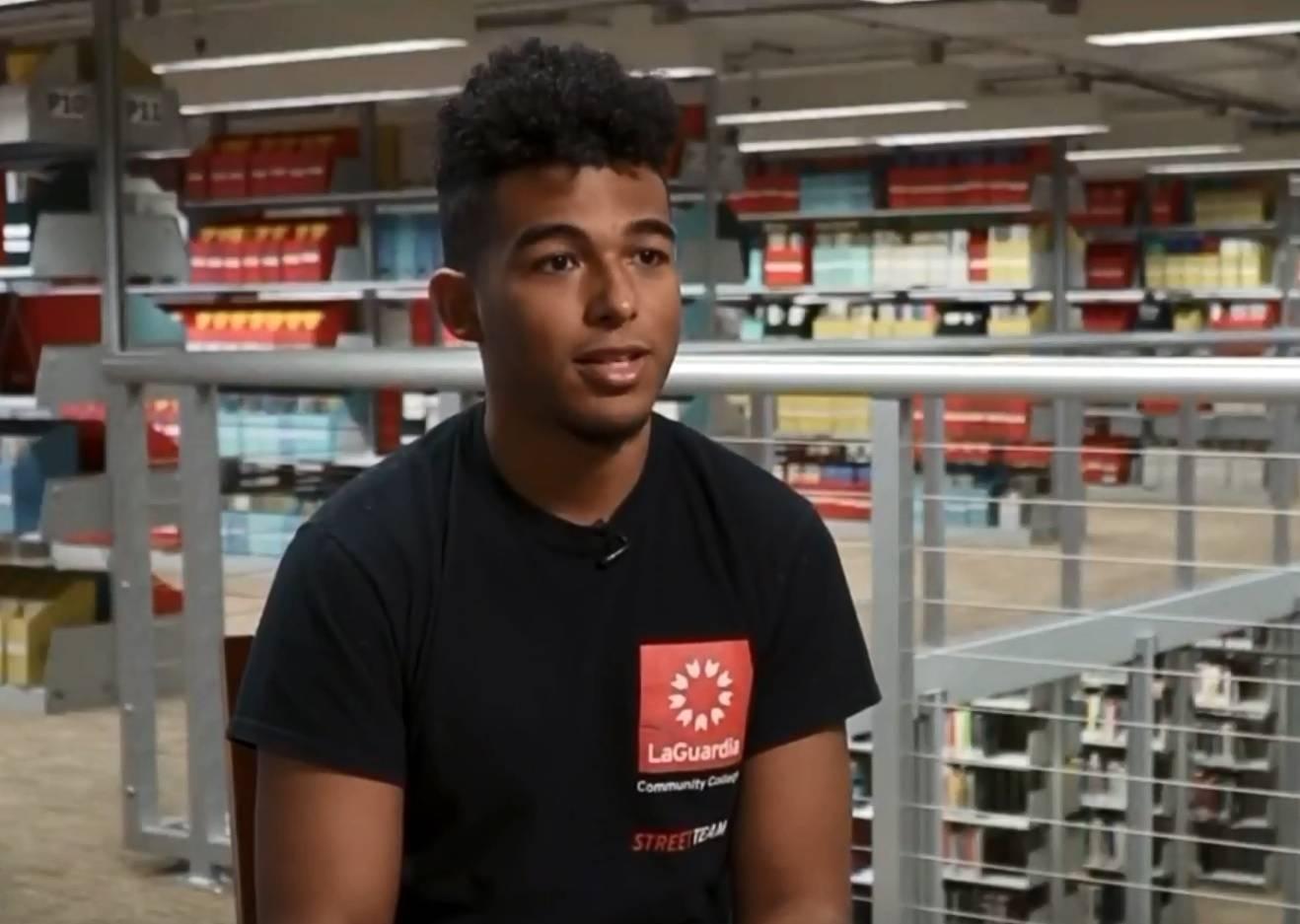 For many students at LaGuardia Community College in New York, making it from the first day of school to graduation is a struggle. And they’re not alone. Part of this national problem? We don't have a good idea of who's going to college, and the ways their complex lives and extra costs can trip them up. Hari Sreenivasan reports as part of our series Rethinking College.

JUDY WOODRUFF: Now, how educators are trying to make sure students from lower-income families are getting a college degree.

As we move into graduation season, we’re going to look at innovative programs helping students climb the ladder of college and economic stability.

To kick it off, we look at the changing profile of many college students and how schools may need to change their approach.

Hari Sreenivasan is our guide for this special series on Rethinking College, which will be airing over the next few weeks on our weekly segment Making the Grade.

GAIL MELLOW: Students need to feel like this is a home. And then we want them to understand the range of services.

I’m Gail Mellow. I’m the president of the college.

HARI SREENIVASAN: President Gail Mellow is well aware that, for many students, making it from this first day to graduation is a struggle.

GAIL MELLOW: What are you going to study with us?

GAIL MELLOW: Your entire life pivots around your ability to complete college, and, more than that, so does your whole family.

HARI SREENIVASAN: President Gail Mellow says the best way to educate community college students like these is to understand who they are and where they came from.

Community colleges educate the majority of the nation’s low-income students. Here at LaGuardia, 77 percent of students come from households making less than $25,000 a year.

GAIL MELLOW: Often, they were not well-served by the urban public high schools, which are so underfunded and so crowded. And so they come to us for that second chance.

DIAMOND STANBACK: I didn’t make a lot of good decisions in life. I had to start all over, learn how to be more self-sufficient.

HARI SREENIVASAN: A single mother of two, Stanback was living in a homeless shelter just two years ago. Now she’s earned 33 credits and is working toward an associate’s degree in business.

DIAMOND STANBACK: Because of my kids, I have to lead by example, basically. I can’t expect them to strive to do better if I’m doing the bare minimum in my life and just collecting welfare checks.

HARI SREENIVASAN: Gail Mellow points to LaGuardia undergraduates like Diamond Stanback to bring attention to what she says is a misconception of the nation’s college students.

GAIL MELLOW: There’s such an enormous gap between who goes to college in the United States and our very old and stereotyped image. More than half of all American college students, undergraduates, go to community colleges.

More than half of those can’t go full-time. About a quarter of our students are working more than 30 hours a week to make ends meet. More than half of them are living at home with parents. So, the idea of college as being this time away, right after high school, it’s not true.

DIAMOND STANBACK: Around four-thirty, five o’clock, I wake up. I have to get up, shower, get dressed before I wake up the kids. I’m making breakfast. I get Isaac dressed, put on his shoes, eat, and everything.

DIAMOND STANBACK: We walk, a 15-minute walk. We get on the bus to go to my daughter’s school. After I drop her off, and I drop off Isaac, and then I get on a train.

HARI SREENIVASAN: In fact, the complex lives of community college students like Stanback are often the reason students drop out.

NIREATA SEALS: Not having food, enough money for books, those things can derail you. It really is the simple things, because financial aid and Pell will pay for tuition, but it is the extra.

So what are the consequences of this perception gap between how we think about college students, and then how we fund the education system?

GAIL MELLOW: The gap between our policies and the reality is enormous. Part of what happens when we don’t have a good idea of who goes to college and why they’re going to college is that we don’t fund the things that, from my perspective, I wish we would fund.

HARI SREENIVASAN: To fill in the gap, LaGuardia’s charitable foundation has raised more than $20 million for student scholarships and emergency funds.

Administrators hope the money will keep more students on track. LaGuardia’s graduation rate for full-time students is 30 percent. Stanback is enrolled in a program at LaGuardia called College Discovery, which assigns her an advocate to help her navigate both finances and academics.

Student Luis Ramos is enrolled in a program LaGuardia calls the Presidential Society, which, in addition to supplying extra funds, it teaches students soft skills.

LUIS RAMOS: It amazes me, like, all the things that I didn’t know that I needed to know to be successful, like setting out my calendar and scheduling everything around school.

HARI SREENIVASAN: Before entering LaGuardia, Ramos twice dropped out of four-year universities because the stress of balancing work and school became overwhelming.

HARI SREENIVASAN: At LaGuardia, Ramos gets free food from the school pantry and professional clothes.

LUIS RAMOS: They just bought me a suit, which is my first suit that I have ever had. So it’s good to know that, when I leave here, I can go to a job interview, and I know I already have exactly what I need to wear.

HARI SREENIVASAN: But perhaps one of the most crucial extras he receives is a free MetroCard. Ramos lives with his family in Flushing, New York, and takes public transportation an hour each way to classes.

HARI SREENIVASAN: And then there’s student Christian Ortiz, 22 years old and a father. Ortiz credits his second chance to a group he joined at LaGuardia called Fatherhood Academy.

A lot of students have some serious challenges, like yourself, about having to take care of a kid, having a job. How does college fit in with all that?

CHRISTIAN ORTIZ: Priorities. It’s a sacrifice that comes with college.

HARI SREENIVASAN: On the day we visited Fatherhood Academy, sacrifice was the topic of the day.

MAN: Once I make this sacrifice, eventually, I know my goals, I know my purpose.

How long is it going to take you to finish?

CHRISTIAN ORTIZ: My goal is four semesters. I don’t want to — yes, but things happen, but I’m resilient, so I’m going to get it regardless.

HARI SREENIVASAN: Diamond Stanback hopes to get a job in human resources.

DIAMOND STANBACK: I feel like I’m doing something more with my life.

HARI SREENIVASAN: After graduation this June, Luis Ramos plans to pursue a bachelor’s degree. In a recent ranking from Stanford University, students like Ramos, Stanback, and Ortiz have helped place LaGuardia Community College fifth in the nation for moving low-income families into the middle class.

For the PBS NewsHour, I’m Hari Sreenivasan in New York.