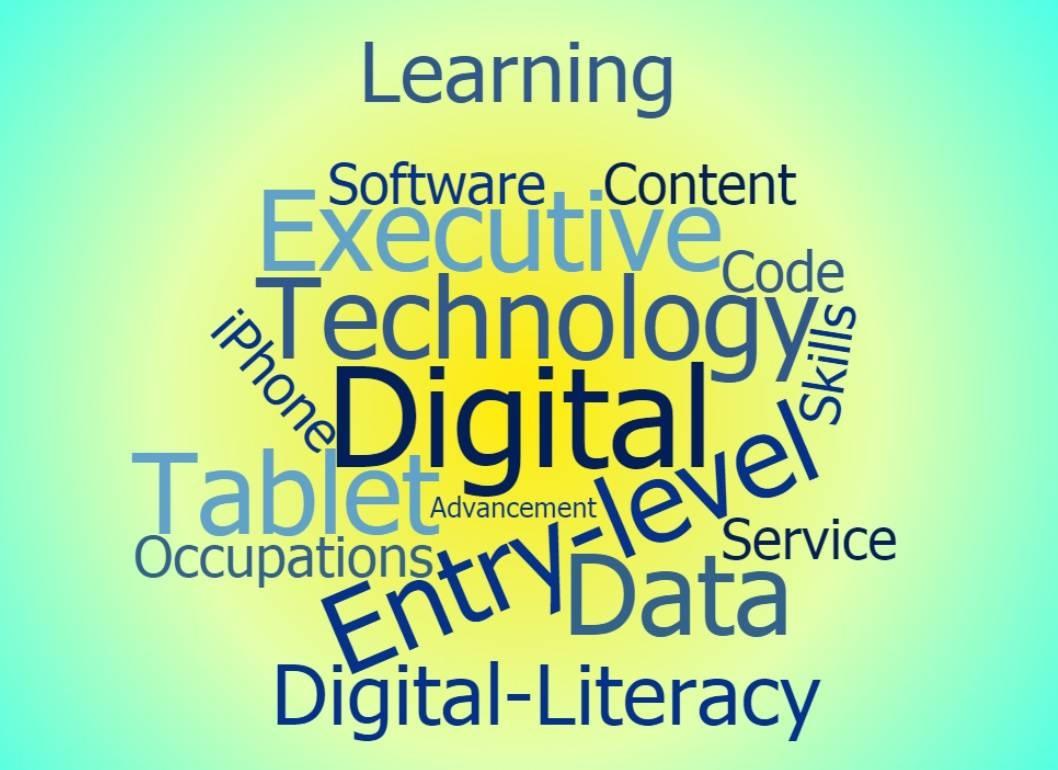 But what may surprise the country’s K-12 educators and policymakers is how work at nearly every rung of the employment ladder is becoming more digitized. Often, the skills needed to succeed have less to do with computer programming than what experts call “digital literacy”—the ability to interpret, create, and strategically use digital information.

“Everyone’s job is changing,” said Mark Muro, a senior fellow and policy director at the Brookings Institution, a think tank. “The ability to read and then conduct first-order analysis of digital information is highly valued in almost all work environments.”

To better understand the central role of digital literacy in the workplace, Education Week took a deep look at four occupations in the Christiana Care Health System. It’s the largest private employer in Delaware, with 11,600 employees and an expected 1,500 new hires this year.

Across the board, said Neil Jasani, Christiana Care’s chief people officer, digital literacy is critical to getting your foot in the door—and advancing.The newspaper got to know: Bobbie Wells, an entry-level service assistant responsible for cleaning and disinfecting patient rooms; Dante Pozzi, a production supervisor in the hospital’s massive kitchen, which churns out 2,500 meals a day; Brianna Buzzuro, a registered emergency-room nurse; and Stefanie Brumberg, who helps oversee the health system’s massive flow of digital data from her perch as corporate director of health-information-management services.

“The ability to create digital content, consume it, act on it, communicate it, share it, find it—all that is tied to patient care,” Jasani said. “Those skills are emphasized more as one rises up the career ladder.”

How can schools build a strong foundation for the digital-literacy skills that are required in real jobs?

Following are profiles of the four employees visited.

Bobbie Wells’ work days start at 7 a.m., when she begins cleaning patient rooms according to a detailed plan designed to stop the spread of infection.

For entry-level workers who want to advance, digital literacy is key.

“I work off the iPhone,” Wells said. “I get phone calls from management, and that’s how I know which room to go to, which patient has been discharged, and what needs to be cleaned.”

Learning the apps was easy, she said, akin to what she sees her older two children, ages 10 and 6, already learning on their school-issued iPads.

“I think they’re preparing them at least for the simple stuff we do,” Wells said.

But even at the beginning rung of Christiana Care’s environmental-services department, new technology is becoming more prevalent. Wells and her colleagues now regularly use a high-tech, ultraviolet-light cleaning system, which is digitally operated and requires extensive training.

And for entry-level workers who want to advance, digital literacy is key.

For service assistants like Wells, the most common next step is becoming a patient-care technician. That position involves interacting with patients and taking their vital signs, and it requires an expanded comfort level with computers and software, as well as the ability to enter and read digital information.

For Muro of the Brookings Institution, that reality holds a vital lesson for schools.

It’s not enough to assume that so-called “digital natives” are developing the digital-literacy skills they’ll need in the workplace by surfing YouTube and playing video games, he said. Nor should schools assume that every student will need to learn to code in order to have a good-paying job.

“What is needed is broad exposure to basic office and productivity software,” Muro said. “It’s the difference between being able to get a job in a stable industry and make it into the middle class, or being locked into the truly bad strata of American jobs.”

What’s the most efficient way to make hundreds of gallons of gravy a week?

In the lower levels of Christiana Hospital, Dante Pozzi initiates the process via technology, using a digital touch screen to program a massive kettle.

“Food service is no different than any other industry,” he said. “Tech is changing everything.”

“Food service is no different than any other industry. Tech is changing everything.”

That sentiment is backed up by Brookings’ recent nationwide analysis of the digitalization of work. Looking at federal data, researchers sought to determine the extent to which the day-to-day tasks required for hundreds of occupations are performed digitally. They assigned each occupation a “digital score” of 1 to 100, then tracked how much that score changed over time.

Between 2002 and 2016, the amount of computer-based work required of cooks in institutional cafeterias increased nearly 700 percent, with the occupation’s score rising from 4 to 31.

In Christiana Hospital, patients place thousands of meal orders a day via iPads. Software aggregates the information into a report for the kitchen. Adjusting recipes is done by software. So is purchasing, plus processing the massive orders that are delivered to the kitchen each day.

Production supervisors even have to review some basic predictive analytics—for example, if the software suggests the hospital should order 300 pounds of turkey for the following week, does that make sense?

Fortunately, Pozzi said, he has some background in technology. About a decade ago, he took classes to become certified by Microsoft and Cisco, leading him to work for several years installing computer systems at area restaurants.

And now, Pozzi said, his future plans revolve as much around computers as food: He’s currently taking online classes at Wilmington University, hoping to earn a bachelor’s degree in business administration and move up into management.

“I think there’s a connection between food and technology,” Pozzi said. “Being able to do both is really exciting.”

In Brianna Buzzuro’s four years as a nurse, her job has changed dramatically.

“All of our documentation used to be on paper,” Buzzuro said. “Now, every moment I’m not with a patient, I’m on the computer.”

In the bustle of the Wilmington Hospital emergency room, that means interacting with multiple software programs at a time: Buzzuro uses one system to enter notes and patient assessments. Two separate software systems are used for moving and locating patients. Others control ordering medications, entering blood work, and examining X-rays.

And it all could change again soon.

“Every moment I’m not with a patient, I’m on the computer.”

“I’m the chair of the [Nursing] Technology and Innovations Council” at Christiana Care, Buzzuro said. “We’re looking at what we have now and how to improve it.”

High on the priority list: a hands-free option for managing communications, such as a smartwatch, that would add a new interface and information dashboard for nurses to become familiar with.

The fast-paced digital work environment, combined with the rapid pace of change, can be difficult for some nurses, said Buzzuro. Recent college graduates who grew up using laptops and smartphones tend to grasp the new systems more quickly than their more veteran counterparts, she said. But even for millennials, there’s still a lot of on-the-job software training.

That’s why part of K-12 schools’ responsibility now is to teach students to read and discern text, images, data, and other digital information in a variety of online environments, said Hiller Spires, a professor of literacy education at North Carolina State University.

“The whole mindset has to be developing the capacity to adapt and learn and relearn constantly evolving technologies,” Spires said.

Jasani, who oversees the hiring and training of Christiana Care’s employees, agreed.

“If I were to give advice to high school students,” he said, “it would be to get very comfortable finding your way around various digital platforms.”

“I’m on conference calls most of the day, usually about the best way to capture the information we need to capture,” she said. “There’s just so much content to synthesize.”

Both the variety of challenges and the pace of change are staggering.

"The health system is in the midst of implementing a 'computer-assisted coding environment,' driven by artificially intelligent software."

Since 2014, Christiana Care has cut its annual medical-transcription budget by 90 percent—the result of rapid adoption of digital speech-to-text systems that automatically transcribe notes as they are dictated by physicians.

Currently, some of Christiana Care’s primary-care doctors are part of a new project: During patient visits, they wear Google “smart glasses” that livestream audio and video of the encounter to remote medical scribes, who document the visit directly into the patient’s electronic medical record, to be reviewed by the physician later. It dramatically increases the amount of information recorded in each visit, Brumberg said, while freeing up doctors to focus on their patients without distractions.

And the near future holds even more disruption, especially for Christiana Care’s dozens of medical coders.

According to the Brookings analysis, their jobs have long been highly digital. But the health system is in the midst of implementing a “computer-assisted coding environment,” driven by artificially intelligent software. Instead of being collectors and locators of information, the medical coders will have to adapt to becoming validators of what the software recommends, making sure the system has not missed anything important and allowing the department to take on more work.

For Brumberg, it will mean yet another flow of new digital information that will need to be fit into a very complicated puzzle.

The takeaway for the nation’s K-12 schools?

The ability to synthesize digital information across multiple sources, pull it all together in a meaningful and engaging way, and share it with others is the key to the corner office of the future, Spires said.

“Schools absolutely need to be teaching these skills,” she said. “If they aren’t digitally literate, people will be left behind.”

This story was produced by Education Week, a nonprofit, independent news organization with comprehensive pre-K-12 news and analysis. Read the original post here.