Trying To Get Your First Job? There's A Class For That 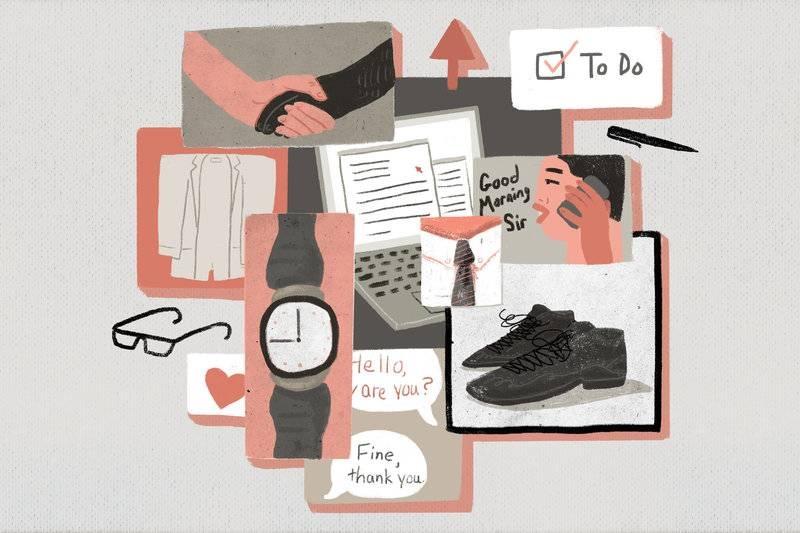 That's the last-minute advice professor Paul Calhoun gives a handful of college students before they head off for a series of job interviews. The Skidmore College juniors and seniors he's talking to are dressed in suits and button-downs; dresses and heels. They stand out in a college library swimming with other finals-takers, most in sweatpants or leggings and T-shirts.

There isn't an actual job on the other end of these interviews, just a satisfactory/unsatisfactory grade from a class called Presenting the Brand Called Me at this liberal arts college in upstate New York.

Calhoun created the popular, semester-long course 10 years ago. He'd spent more than three decades working in the banking industry, where he saw the importance of presentation skills: "A lot of it is acting."

When he came to Skidmore as a business professor, he noticed a lot of students struggling with self-confidence and public speaking. "Students just plain don't like to talk about themselves," Calhoun says. "Some students have never had to."

He enlisted the help of theater professors to help him shape what eventually became this class, in order to give business majors "the same training that the theater department gives to actors."

Over the 13 weeks, there's some role-playing with improv — "Talk for a minute about anything — go!" There are dance classes, and a slew of guest speakers who talk about cover letters, resumes and personal branding. By the end of the course, students leave with a polished "STAR" story — the short story you craft about yourself and your abilities that's designed to help land you a job.

I took this course my senior year at Skidmore and my mock interview ended up landing me my first job. I'm not the only one with a story like that, and the students wrapping up the course this year are anticipating that it will have that power for them, too.

Dante Delemos is a junior business major, soft-spoken but confident. In his mock interviews, he tells a story about losing the election for class president, back when he was in high school.

Is he nervous? After all, he's had only one other job interview before today.

Yeah, he says, a little bit. But it could have been much worse: "Being able to put myself in a headspace where it's just for a class and it's a learning experience," he says, "that definitely helps it not be such a nerve-wracking experience."

Delemos is originally from the Bronx, and he's the first in his family to go to college.

"I like to use that as an advantage," he says. "I come from a place where people aren't very successful, and that makes me want to drive to be more successful."

He says this class has helped him realize that telling a story — his story — has value, so he uses it whenever he can: in cover letters, to shape his resume and during interviews.

And it worked. Delemos is spending the summer working in finance, with an internship in Manhattan.

To land internships like that, students need these skills. And yet, there's a big divide between folks who just know them — maybe their parents or guidance counselors or others taught them — and those who don't. Often, that divide widens for students who come from low-income families.

Course in high school, too

"I didn't know what a resume was at one point in time and I didn't know how important they were," Tytianna McClenningham, a recent high school graduate, says in the sun-drenched cafeteria at Ballou Senior High School in Washington, D.C.

In her sophomore year, she took a class called Tenacity that's in a handful of the city's public schools. In addition to making resumes, the class created professional-sounding email addresses for themselves. Say goodbye to "Bubblegum123."

"You can't email your future boss with some really odd email name," she explains. And there's email etiquette, too. "I didn't even think it was important to use a subject in an email," McClenningham says. "But now I know."

The Tenacity curriculum is filled with lots of useful tips, from how to dress professionally to how to code-switch under pressure. But McClenningham says the biggest thing she learned was confidence. She's straight-up cocky about her stellar resume, and maybe she should be: Most of her friends didn't take the class, so they look to her for help and edits on theirs.

That resume helped her land a summer internship. And when she starts college at Central State University near Dayton, Ohio, this fall, she says she's actually looking forward to interviewing for jobs and work study.