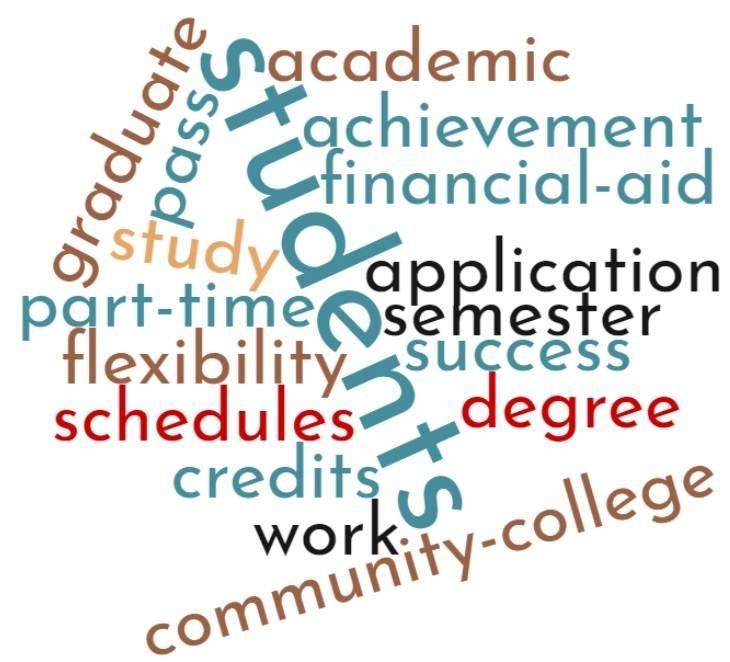 DALLAS — A new report shows that part-time student success in community colleges is key to closing achievement gaps for minority students, according to EAB, a research and technology services company in Washington, D.C.

The report, “Reframing the Question of Equity,” was released Monday during the American Association of Community Colleges’ national convention. The report highlights that, at community colleges, black and Hispanic students are more likely than white students to attend part-time, and by doing so, they are more likely to negatively affect their ability to graduate.

The analysis, along with interviews with more than 100 community college leaders, showed that 84 percent of Hispanic students and 81 percent of black students enrolled part-time for at least one term, compared to 72 percent of white students. However, attending part-time for only one semester meant a 39-percent decrease in completion rates for Hispanic students and a 31-percent decrease for black students compared to white students, who see a 29-percent decline in completion when they switch from full-time to part-time.

But the research does not mean encouraging full-time statusis the answer for all students, even though going full-time increases a student’s likelihood of earning their degree, said Christina Hubbard, director of strategic research at EAB. Policy makers like New York Gov. Andrew Cuomo and nonprofit organizations like Complete College America have been advocating for scholarships and other programs that incentivize full-time status.

Most community college students are part-time, she said.

“We can’t ignore that fact, because that [community college] population is made up of underrepresented minorities, low-income and first-generation students, and they are disproportionally likely to attend part-time,” Hubbard said. “Full-time is not going to work for every community college student. The data says it won’t work for most students because of barriers. Underrepresented minorities and low-income students, they’re more likely to be working. So, to expect them to go 15 credits at a time is setting them up to fail.”

City Colleges of Chicago, for instance, recently changed its tuition structure to make it fairer to part-time students and not penalize them for their status.

Instead, colleges should focus their work on accommodating part-time students and their needs, Hubbard said.

“It’s about making sure we’re bringing the campus to the palms of students’ hands,” she said. “If they’re attending part-time, it most likely isn’t because they want to be part-time, but because they don’t have time to spend on campus.”

Hubbard points out that many colleges have done a great job with getting more underrepresented populations, like minorities and low-income students, enrolled, but that hasn’t led to improved graduation rates.

Officials at Trident Technical College in South Carolina saw pass rates increase when the public college made changes to its course scheduling and orientation that accommodated the needs of part-time students.

“Our success rates were so miserable,” said Brian Almquist, dean of student engagement at the college. “Enrollment was going up, but the success rate was going down.”

So, the college changed its programming schedules by dividing semesters into seven-week periods.

“They looked at their own data and saw that students who enrolled in shorter terms had better success rates,” Hubbard said. “If something catastrophic happens midway through a term … then you withdraw, and you’ve essentially lost the credits you’ve put in.”

But under a divided semester, if students choose to withdraw after seven weeks, they don’t lose the credits or the work they put into the first chunk of time.

Laurie Fladd, the associate dean of science and math and director of academic advising at Trident Tech, said many times those students will come back to the college the next semester to pick back up where they left off, and it’s better to tell them they didn’t completely lose all their work because they needed to pause their education in the middle of a semester.

The college also changed the orientation and advising it provided part-time students.

For instance, when students apply to the college, they get access to software that takes them through an orientation process. That process doesn’t happen in one hour or one day, or even over a weekend, like many college orientation sessions. Instead, it doles out information piecemeal to the student, depending on where they are in the semester or specific events. So, the student receives information about registering for classes or financial aid as they’re at that stage of the process, Fladd said, adding that the technology has also improved and made more time for advisers to talk to students.

“We’re advising part-time students the same way we would full-time, but we’re trying to find out their particular life situation and what it is that makes them be part-time,” she said, adding that the information helps the college accommodate their needs and provide more flexibility for them.